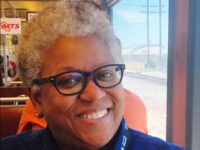 Ajuan Mance is a Professor of English at Mills College and a lifelong artist and writer. She holds a B.A. from Brown University and an M.A. and Ph.D. from the University of Michigan. In both her scholarly writing and her visual art, Ajuan explores the complexities of race, gender, and identity in the U.S. The creator of the 1001 Black Men online sketchbook, Ajuan has participated in solo and group exhibitions as well as comic and zine fests, from the Bay Area to Brooklyn. Ajuan’s comics include the Gender Studies series, the comic strip Check All That Apply, and others. Her comics have appeared in several anthologies including, most recently,  Drawing Power from Abrams Press, winner of the 2020 Eisner award.

About the Visual Activism series: How has visual culture played a role within the social movements of the last several decades, such as #BlackLivesMatter and Extinction Rebellion? How, we might ask, is activism made visible; how does it erupt (or disappear) with collective fields of vision? Drawing upon Black South African queer photographer Zanele Muholi’s term “visual activism” as a flexible rubric that encompasses both formal practices and political strategies, this series interrogates visual cultures of dissent, resistance, and protest.