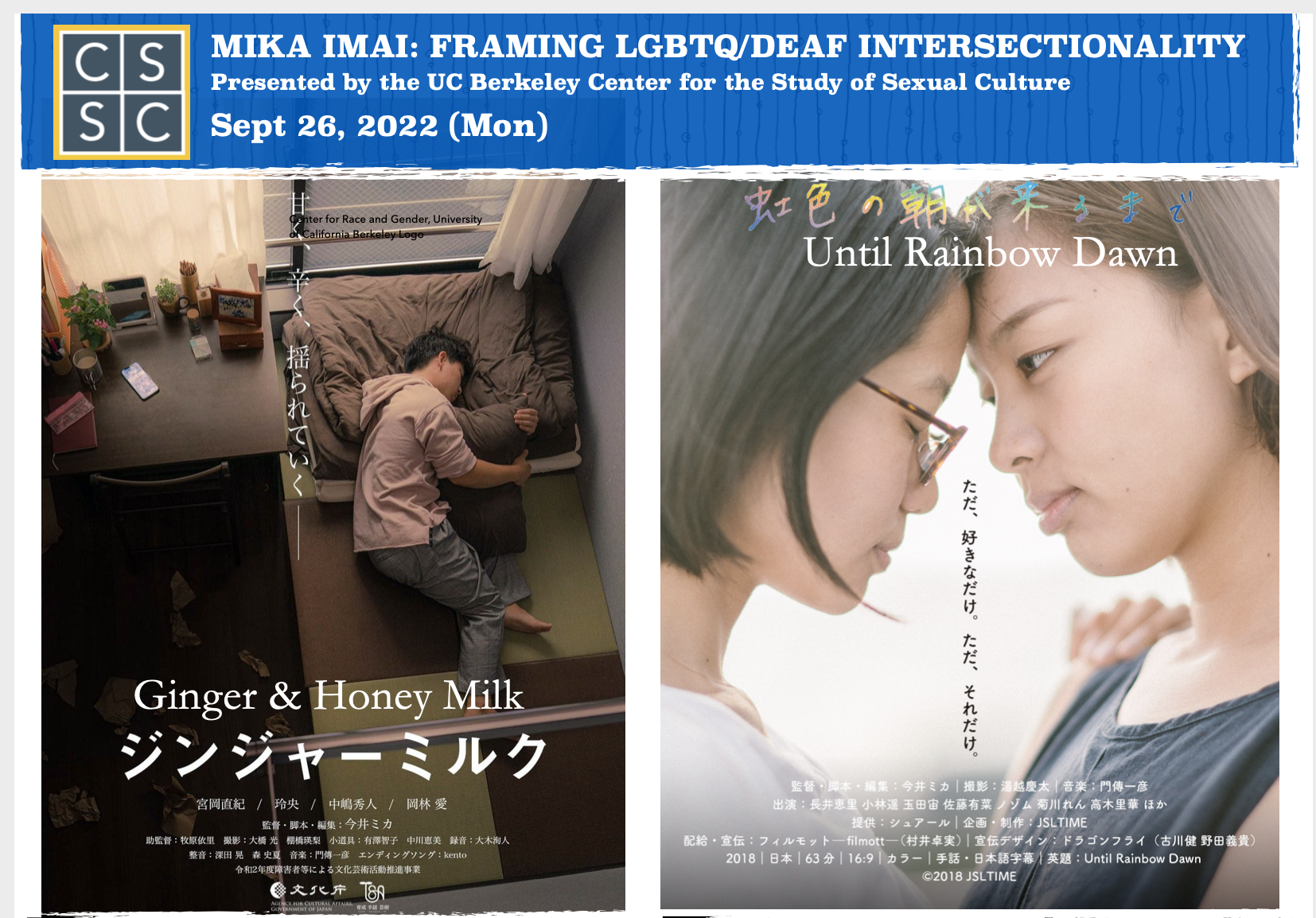 The UC Berkeley Center for the Study of Sexual Culture will feature the filmmaker Mika Imai from Japan, the creator of the LGBTQ/Deaf films Ginger and Honey Milk and Until Rainbow Dawn. Imai will screen the two films and participate in Q&A sessions.

This event is free and open to the public.
ASL & Japanese Sign Language (JSL) interpretation provided.
This event is wheelchair accessible.
We ask that all attendees wear high quality masks and avoid wearing fragrances for this event whenever possible.
Please visit the CSSC NEWS page for film trailers and the Mika Imai LGBTER interview excerpts.

Until Rainbow Dawn
Hana and Ayumi, both Deaf, meet at a sign language circle and begin to build a close relationship; however, when Hana tells her parents about falling in love with Ayumi, she is rejected by her mom. Ayumi invites Hana to a Deaf LGBTQ gathering that strengthens their bond. [2018, Japanese Sign Language, English subtitles/63 mins]

Cosponsored with: The Dept. of Gender & Women’s Studies, The Center for Race and Gender, The Othering and Belonging Institute (OBI) Disability Studies Cluster, The Center for Japanese Studies, QWOCMAP: Queer Women of Color Media Arts Project, and the UC Berkeley GWS Visiting Scholar from Meiji University.

Please make inquires or access requests by email at cssc@berkeley.edu or via the QR code on the event poster.

There will be a Panel Discussion as part of the 18:00-20:00 Until Rainbow Dawn screening. The participants are listed below.

Mika Imai has been filmmaking since the sixth grade and by sophomore year in high school was recognized with a best film award at the Yokohama Deaf Art Festival. In 2014 Imai received a best film award at the 2nd annual Irish Deaf Film Festival for the short film Sign Name Game. Imai’s earliest work relies upon visual action and Japanese Sign Language (JSL) as the vessels for expression. Imai’s first film to incorporate a soundtrack, Until Rainbow Dawn, debuted in 2019 at the 27th Rainbow Reel Tokyo International Lesbian and Gay Film Festival and featured at the 29th Hong Kong Lesbian and Gay Film Festival. Imai’s latest feature Ginger and Honey Milk premiered to a sold out audience at the 3rd Tokyo Deaf International Film Festival in 2021.

Imai produces a variety of entertainment such as the comedian duo “Deaf W”, and media such as “The Sign Language Picture Book of Living Creatures”,  and in addition does video production work including commercials. Imai’s Youtube commercial for the Japan Foundation Phone relay service, “Never Give Up” premiered in March 2022 and in one month received over two million views.

Drago Rentería is a Deaf and disabled Chicano transgender elder and long-time LGBTQ/social justice activist, leader, and educator. Drago serves as Executive Director of Deaf Queer Resource Center, a national organization, based in San Francisco, for Deaf LGBTQ communities. He is also currently on the Transgender Law Center’s national Disability Project Advisory Board. In addition to his LGBTQ activism work, Drago is also a photojournalist and documentary photographer and uses his photography to bring more awareness to issues such as racism, housing injustice, police brutality, and gentrification. He is a graduate of UC Berkeley and did part of his undergrad work at Gallaudet University.

Karen Nakamura is the Haas Distinguished Chair of Disability Studies and Professor of Anthropology. She is a cultural and visual anthropologist and filmmaker whose research focuses on disability, sexuality, and minority social movements in contemporary Japan. Her first book, Deaf in Japan, was on sign language, identity, and deaf social movements. Her second book on schizophrenia and mental illness in Japan, entitled, A Disability of the Soul, was published in 2013 and was also accompanied by two films entitled Bethel: Community and Schizophrenia in Northern Japan and A Japanese Funeral. Her new project explores the intersections of disability, gender, and sexuality.

Johnny George is an Assistant Professor from Meiji University in the Department of Political Science and Economics. He is a Visiting Scholar in the Gender and Women’s Studies Department. His primary work focuses on the linguistics of Japanese Sign Language. He is currently working on a project examining the representation of Japanese Sign language and JSL users in film and media.

Mel Y. Chen (moderator, they/them/ta+) is the Richard and Rhoda Goldman Distinguished Chair in Undergraduate and Interdisciplinary Studies and Director of the Center for the Study of Sexual Culture, as well as the Disability Studies Minor. Mel hails from the Department of Gender and Women’s Studies and teaches and researches in areas including critical animal studies, language, trans studies, disability studies, sexuality and race, as well as in the arts. Mel’s first book, Animacies, is about colonial hierarchies of being. A second book is forthcoming in 2023, entitled Intoxicated: Race, Disability and Chemical Intimacies of Empire. Mel is also a member of a sustaining queer-trans of color arts group and is on the Board of Directors of the Queer Women of Color Media Arts Project.